Carla A. Wiese is a Flight Nurse for the 375th Aeromedical Evacuation Squadron of the U.S. Air Force. With a refined background in critical care nursing, clinical medicine, and aeromedical evacuation, Ms. Wiese effectively and diligently serves as Officer in Charge (OIC) of operational planning, flight nurse, and supervisor of her division, in efforts to support the missions and objectives of the government organization dedicated to the protection of the United States. With a wealth of knowledge and experience, Ms. Wiese shines as a luminary in the field of military health care, having been honored for her altruistic philanthropic endeavors and outstanding service to her field.

Over the course of a successful military career that has spanned more than 15 years, Ms. Wiese has received a number of honors and accolades, which have included three VIP of the Year honors from Cambridge Who’s Who, induction into EliteAMERICAN Nurses in 2011, a Professional of the Year title from Who’s Who Publishers in 2011, and induction into Worldwide Who’s Who Lifetime Achievement. Moreover, Ms. Wiese has received several Air Force Medal Awards, a Master Nurse Badge, and Senior Nurse Wings for her exceptional efforts in military health care. She is a member of the Military Officers Association of America, the American Association of Critical-Care Nurses, and the Emergency Nurses Association. 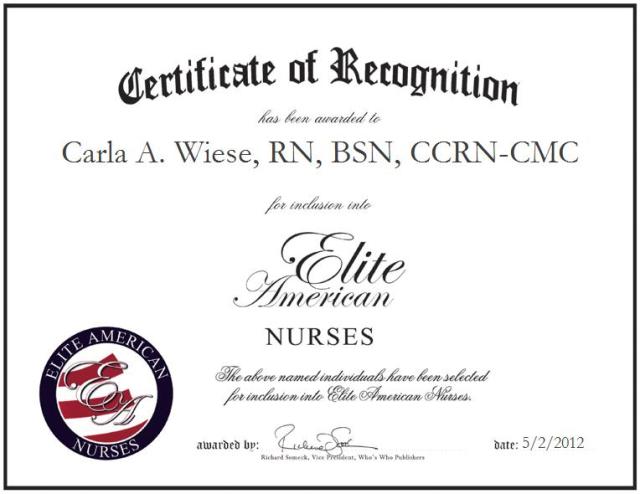